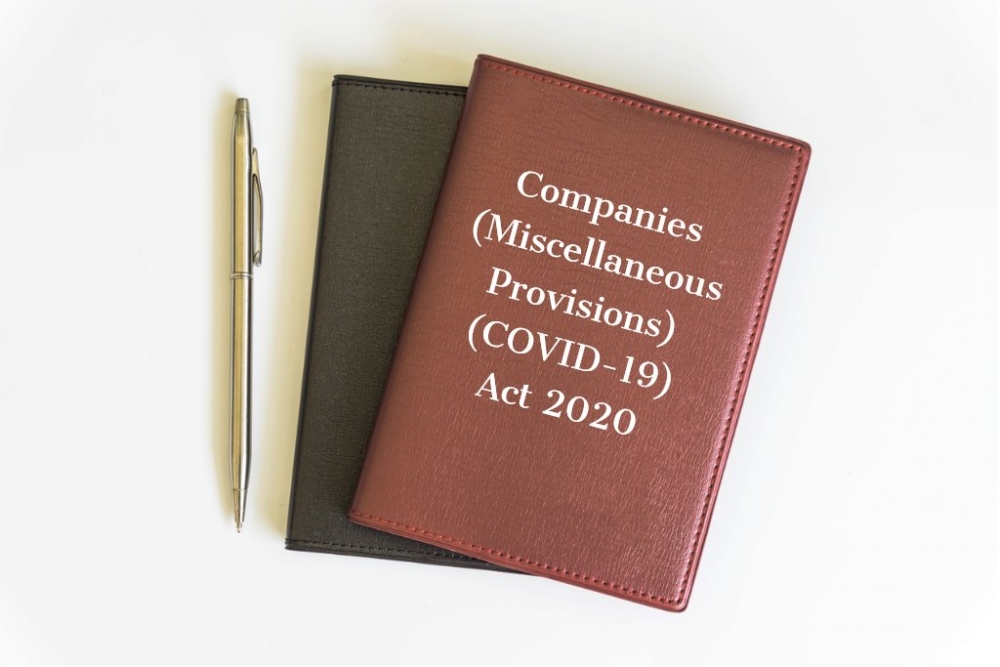 In response to the difficulties encountered by many companies during the current Covid-19 pandemic the Companies (Miscellaneous Provisions)(COVID-19) Act 2020 (the “Act”) was commenced on the 21st of August 2020.

The Act provides some welcome temporary measures to ease the burden of compliance requirements under the Companies Act 2014 and the Industrial and Provident Societies Act 1893.

These new temporary measures introduced by the Act will apply for an interim period up to the 31st December 2020 however in recognition of the evolving nature of the Covid-19 Pandemic, the Act also provides for an extension of the interim period if so required at a later stage.

While summarising some of the key aspects of the temporary measures below, it is clear that one of the central elements of the Act is to ensure that companies can continue to remain compliant with regulations surrounding general meetings during the interim period.

General Meetings during the interim period

In accordance with the Companies Act 2014 every company is required to hold an Annual General Meeting ‘AGM’ in each year with no more than 15 months elapsing between the date of one to that of the next, in addition the directors of a company shall lay the financial statements before its members in general meeting no later than 9 months after the financial year end date. The Act provides that any company due to convene and hold an AGM during the interim period may do so at any time prior to the 31st of December 2020 regardless of the provisions of the Companies Act 2014 or the company’s constitution.

While the Companies Act 2014 provides that an AGM or an Extraordinary General Meeting (EGM) may be held in 2 or more venues using technology it does not permit the holding of a fully electronic AGM or EGM. In accordance with the new measures a company, during the interim period, may conduct fully or partially electronic AGMs or EGMs subject to all attendees having reasonable opportunity to participate in the meeting. While the Act includes a series of requirements in conducting these meetings, the ability to convene and hold such meetings electronically, regardless of the provisions of the Companies Act 2014 or the company’s constitution will provide greater flexibility for companies during the interim period.

The Act provides that during the interim period, the directors may, at any time up to the end of the day prior to the day on which an AGM or EGM is to be held

or due to exceptional and unexpected circumstances, the directors may cancel such meeting at any time prior to the holding of that meeting.

During the interim period the Act provides that each member and proxy who participates in an AGM or EGM by the use of electronic communications shall be counted in the quorum of the meeting.

Notice of a General Meeting

During the interim period where an AGM or EGM is proposed to be held wholly or partly by the use of electronic communications technology, the notice of the meeting shall specify;

The Act also recognises the difficulties facing co-operatives due to the restrictions put in place with regard to public gatherings when convening and holding AGMs and EGMs. The amendments applying to companies in relation to AGMs and EGMs have been extended (or adapted where necessary) to meet the needs of co-operatives during the interim period.

During the interim period where the directors of a company have recommended that the declaration of a dividend be adopted by resolution at an AGM or EGM and, subsequent to convening the meeting, the directors form the opinion that, due to the actual or perceived consequences of COVID-19 on the affairs of the company, the dividend ought to be cancelled or reduced to a particular amount, the directors may

In accordance with the Act any document to be signed under seal during the interim period may consist of several documents in like form. This means that any instrument to be made or executed by a company may be signed by a director and the company secretary in counterpart and sealed in counterpart but will be deemed as valid for all purposes as if the documents were, taken together, one document.

In addition to recognising the challenges facing companies in light of the restrictions imposed on the general public the Act also takes into account the difficult financial constraints facing companies and introduces a series of amendments in connection with Examinerships, Court Winding Up, and Creditor Meetings.

An examiner during the interim period may on an “exceptional circumstances” basis apply to the courts for an extension of time permitted to prepare and submit a report to the courts. In accordance with the Act where an examiner has been unable to finalise the report within the current timeframe an additional 50 day extension may be available.

In making an application to the courts during the interim period, petitioning the winding up of a company, the debt thresholds for one or more creditors has been increased from €10,000 to €50,000.

The Act provides that during the interim period, a meeting of creditors may be held wholly or partly by the use of electronic communications technology.