COVID-19: Charity Reserves Policy and using Reserves during a Crisis 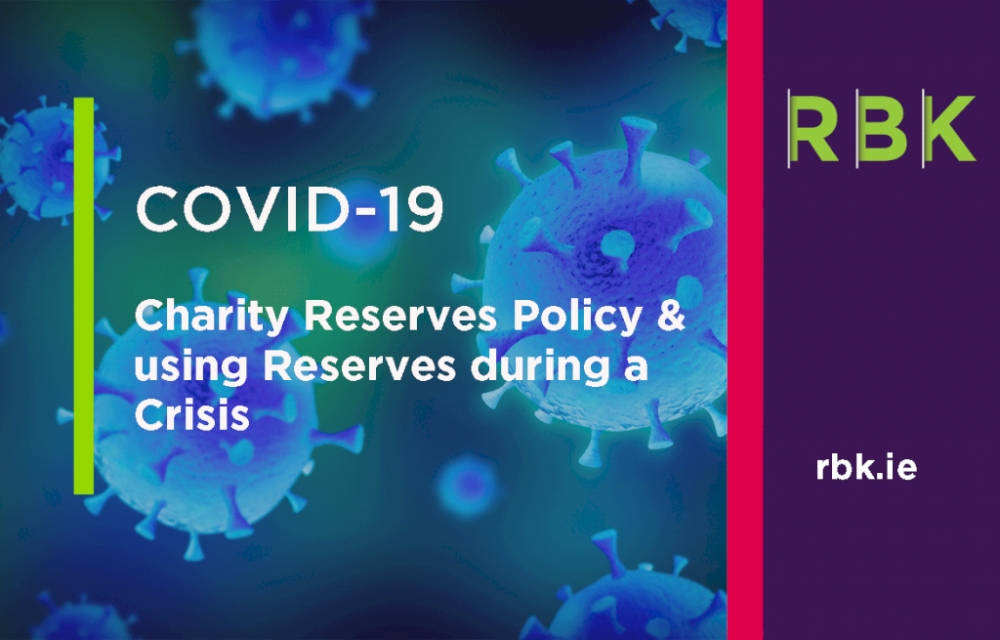 On the 13th May the Charity Regulator Authority (CRA) issued a guidance document “Guidance on Charity Reserves”. the purpose of which is to provide support to charity trustees:

Generally, reserves are the surplus funds that a charity has built up over a number of years and which can be freely spent on any of its charitable purposes. Any restricted surpluses must be excluded from the calculation as these must be used for specific purposes as specified by the donor.

A Charity is expected to spend its income on its charitable purpose, which includes delivering its activities or services, unless there is a specific reason for retaining it. The main reasons why charities try to build up reserves is:

An appropriate level of reserves will safeguard the charity from future shock events and demonstrate that the trustees are exercising appropriate governance oversight.

A reserves policy is a key tool to assist with this process and is part of the recommended suite of internal financial controls which should be in place.

Such a policy allows Charity’s to explain to their donors and key stakeholders what their desired level of reserves is and plans to reach the target where reserves are below the desired level. Similarly, if there is an accumulation of reserves, a reserves policy allows an explanation to be given as to how any excess will be utilised in the future.

There are no hard and fast rules for writing a reserves policy. Each Charity, based on its own scale and complexity will have different requirements. However, the guidance note outlines certain best practice considerations which include the following:

What is an appropriate level of reserves?

The guidance note recognises that this will be unique for each individual charity. However, consider:

The precise level of reserves and how these will be used is ultimately a matter for the trustees. These can be expressed as a specific monetary amount or it may reflect a number of months operating expenditure. Trustees need to consider the following as greater levels of uncertainty may require higher levels of reserves:

How to use reserves in a crisis

During a crisis such as during the current Covid-19 pandemic, managing a charity can be a challenging and worrying time. Reserves are there to be used in situations like this and trustees should consider:

It is important that all Charity’s consider the requirement for reserves and formulate this in a Board approved policy. This policy should be reviewed at regular intervals to ensure it remains appropriate, especially in the current evolving pandemic environment.

It is also important that charity trustees use the Directors report to communicate effectively with all stakeholders – Funders, Beneficiaries and the general public as to what steps the Charity is taking to ensure good financial management and safeguard the assets of the charity via the holding of reserves. This includes an adequate explanation for any gap between the desired levels of reserves and reserves actually held.

How RBK can help: